hen most people think of the Subaru Impreza, They think rally car. Haroon’s Impreza is a little different though. The Subaru is being built as a street/track day machine and its party piece is the Dry Sump 2.3L EJ20 Engine for which he specced a Borg Warner EFR9180 Turbo.

And that’s where we come in. The EFR9180 is the dimensionally largest turbo in Borg Warners range. As a result, the stock location is not just tight, its physically will not fit. The solution? Front mount.

Our first port of call was to actually get the turbo in place and mounted. From there all the other parts can then be built around it, however, we always try our best to not needlessly relocate components. This is why we always ask for cars to be delivered to us as complete as possible. A little struggling, swearing, grinding, and welding later. We have one front mount turbo manifold built! 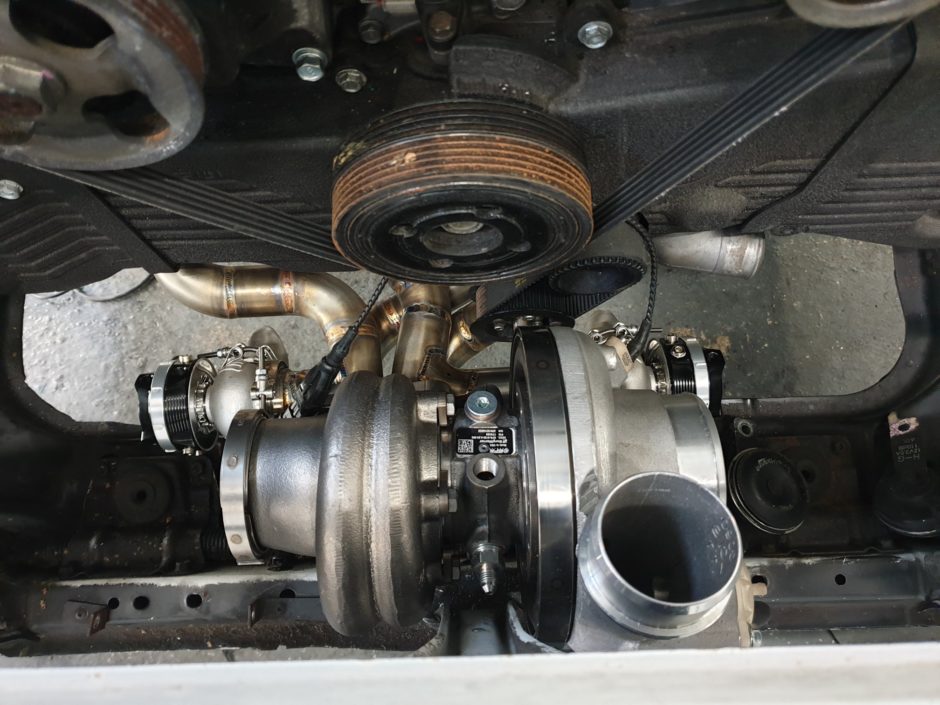 As you can see from the above picture, The 9180 is using the Internal Wastegate exhaust housing yet has a pair of Turbosmart Gen V Comp Gate 40 External Wastegates fitted. The reason for this is that Bor Warner only produces the exhaust housing for external wastegate in a 1.05 A/R Ratio, whereas if using the IWG option you can have a lower A/R Ratio. Common practice is to simply remove the actuator and weld up the wastegate port to make it an external wastegate housing. And as the EJ20 here is only a 2.3L we decided upon that method. 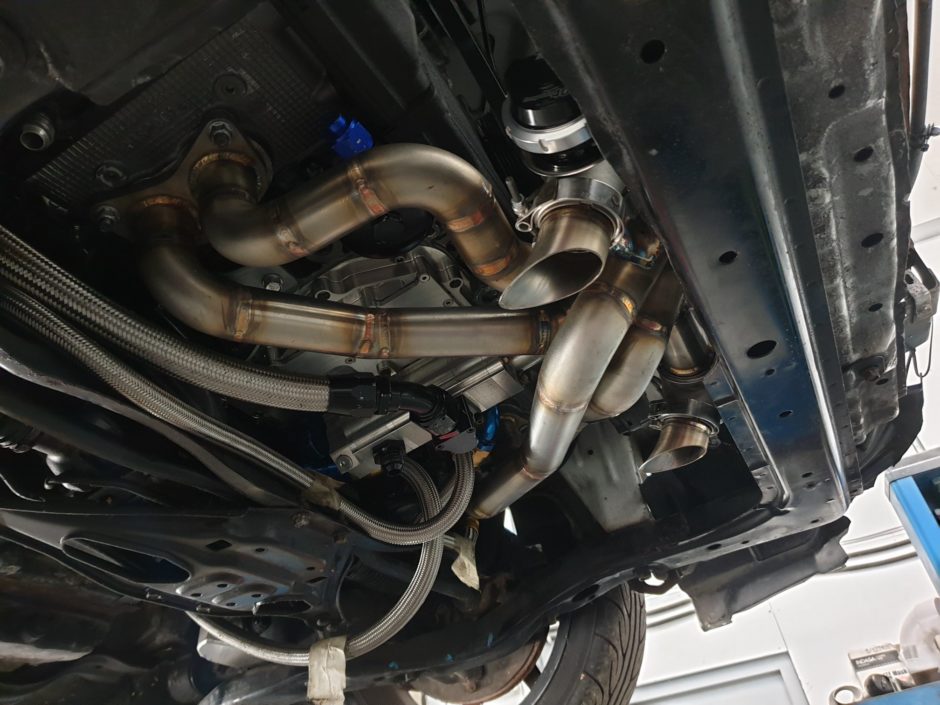 The manifold itself is constructed from the same thick wall 304 Stainless steel tubing that our production manifolds are made from and features our waterjet cut flanges using our stub technique (more info on construction here) We also took the time to make it equal length for extra internet points. (and the performance aspect of course) 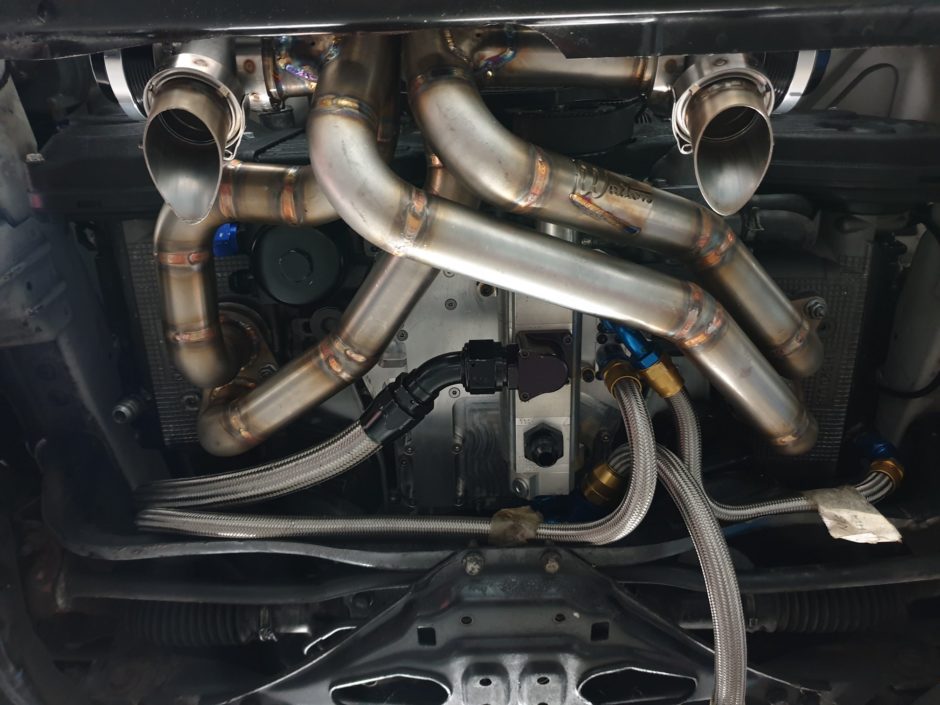 Building around the dry sump takes away some of the restrictions of the wetsump EJ20 engines, but does require clearance for the oil pump drive pulley. The oil lines you see are only a mockup and will be worked around the manifold at a later stage in this cars build. 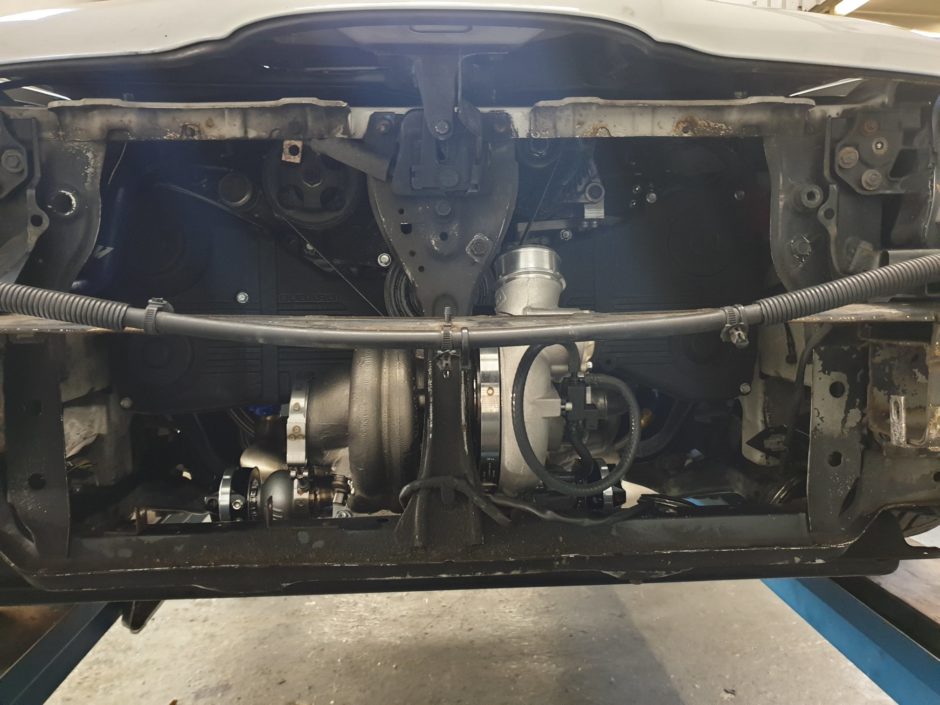 The next step of the project was to fit the intercooler and radiator, As this is going to be a high powered car, Haroon the owner opted to go with a Garrett Intercooler core, which has much better efficiency than the budget options. Part of this process is to fit end tanks to the core. As this is quite a large core we opted to fit use divider fins. The idea here is that the find help the air to spread out across a larger area of the core. 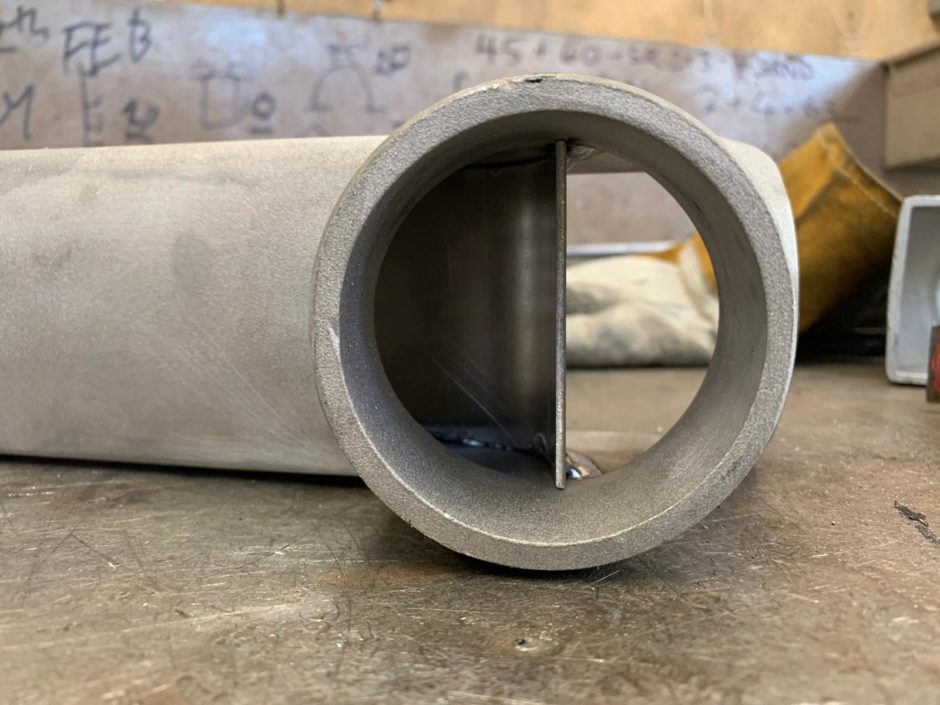 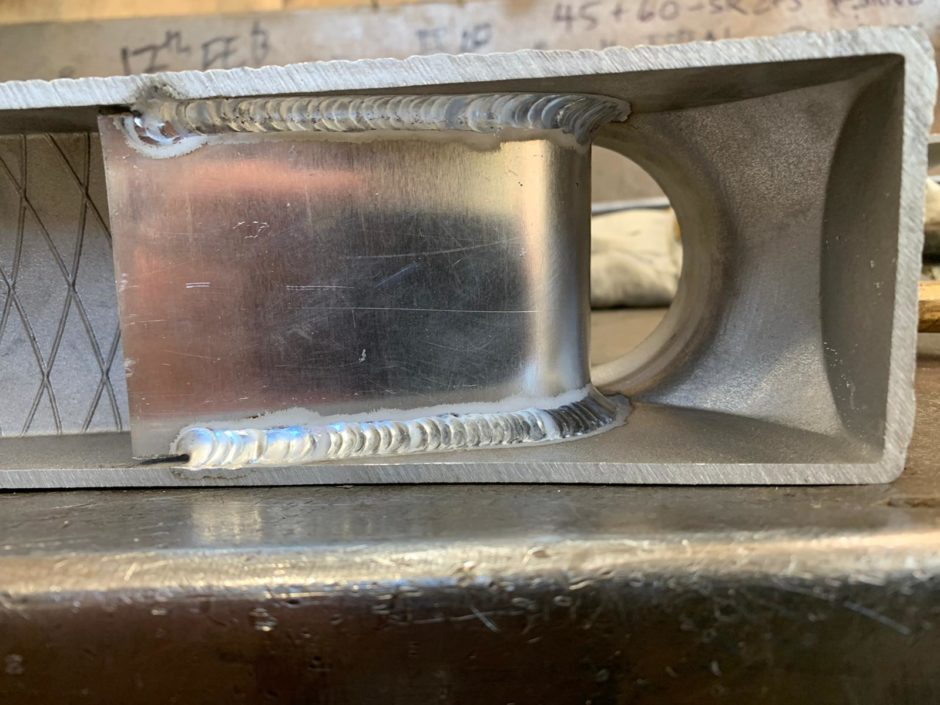 Once the completed, the intercooler along with the Radiator can be mounted and plumbing can begin. As you can see from the below image. We have also fabricated the cold side boost pipe that meets the throttle body along with the air intake pipe. 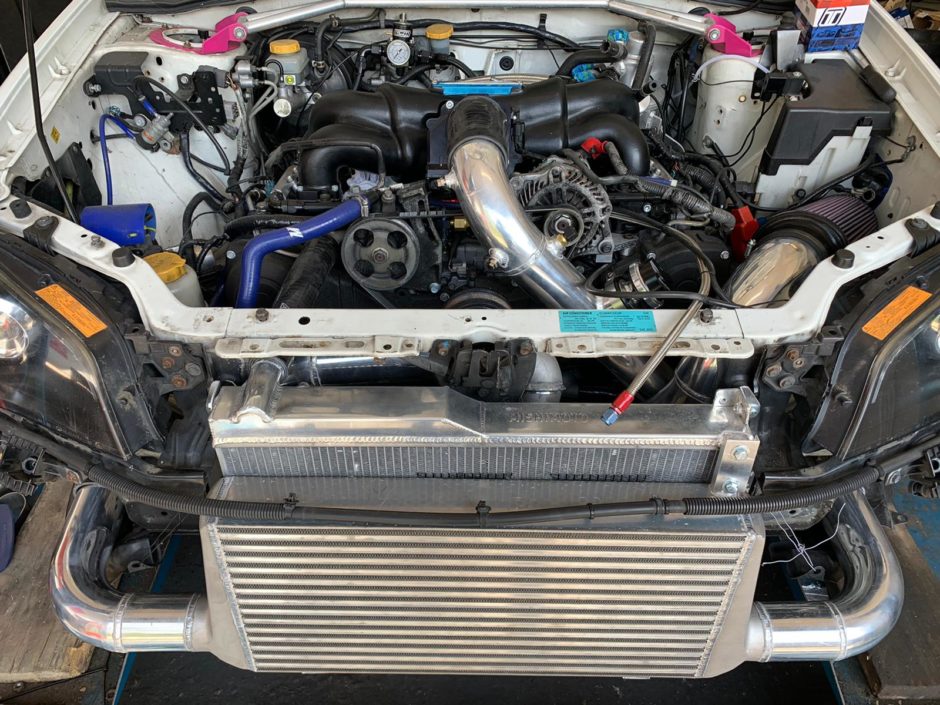 More aluminium piping below, We could have saved a little pipe length by routing the pipes the opposite way around, however, the downside to this method would have been the air exiting the intercooler would then have to closely pass the very hot downpipe, which would considerably reduce the efficiency of the setup.

With the turbo at the front, the problem that there isn’t an OEM route for the downpipe to take. Especially when needing something to flow 800bhp plus that the turbo can produce. We looked at a few methods but ultimately agreed to run the downpipe under the subframe. The typical size used for this type of power is 3.5″, which when used in a well-routed system will flow plenty of gas to make the big power. As the ground clearance is tight under the subframe, we elected to use some oval tubing to increase clearance. 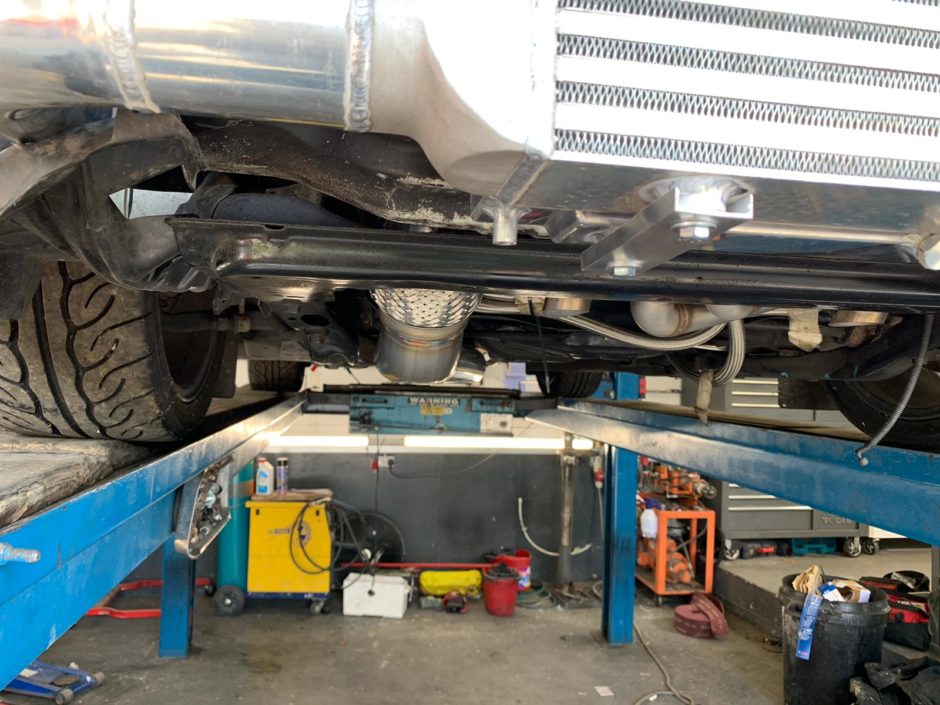 We try to only use oval tube when absolutely necessary. The reason being is that unfortunately, it does not flow as well as round tubing. But in this situation, we will still be able to maintain the required flow.

And there we have it, one front turbo Subaru Impreza. Check back later in the year when it returns to have the exhaust system built.

For any question please do not hesitate to get in contact. 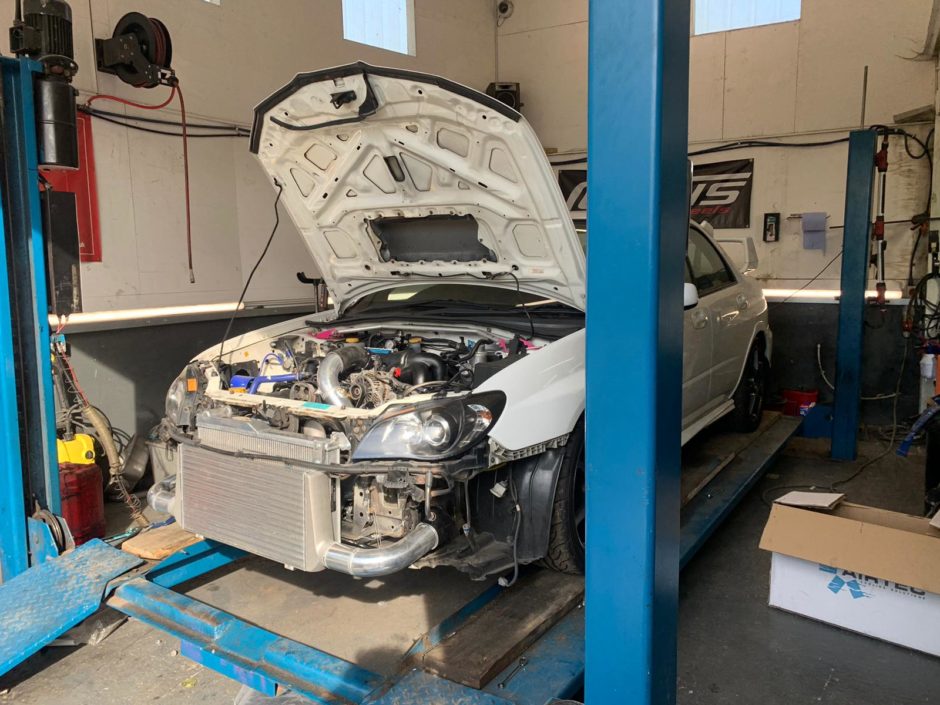