Anti Lag or more specifically Fresh Air Anti Lag is an exciting topic!  What is it? Why do I need it? and where can I get it?

On turbocharged cars, there are many enemies, but one of the most prominent is Turbo Lag. What is turbo lag? A turbo is effectively a compressor that is driven by exhaust gas. The exhaust gas comes from the cylinder head through the exhaust manifold and blows the turbo round. As the turbo spins it drives a compressor wheel on the other end of the shaft which forces more air into the engine, allowing for more combustion meaning more power! Turbo lag is the delay in the exhaust gasses spinning the turbo. Before it actually being able to force enough air into the cylinder to make a difference. The larger and more powerful the turbo, the more lag there will be.

The most common method to reduce the lag is to use an “anti lag system” or ALS for short. There are a few different systems available, the simplest is to use an e-throttle to allow more air through the engine, combined with retarded timing to create combustion in the exhaust manifold, this combustion effectively spins the turbo faster, and ultimately reduces the lag. This method is most likely the method most people will encounter the most.

Fresh Air Anti Lag is an extension of this system, whereby we use a valve referred to as a fresh air valve to pass air into the primary pipes of the exhaust manifold. At the same time, the ignition of the engine is retarded to allow the combustion to happen inside the exhaust manifold. much in the same vein as the e-throttle system, but with much greater results.

The fresh air system is more effective as the air used for combustion does not have to pass through the cylinder head, thus more air is available for more combustion.

In summary, using ALS we can create boost whilst the driver is off the throttle, and then once your foot hits the throttle pedal, that boost is right there to propel you forwards (or snap a driveshaft, blow up a gearbox etc) 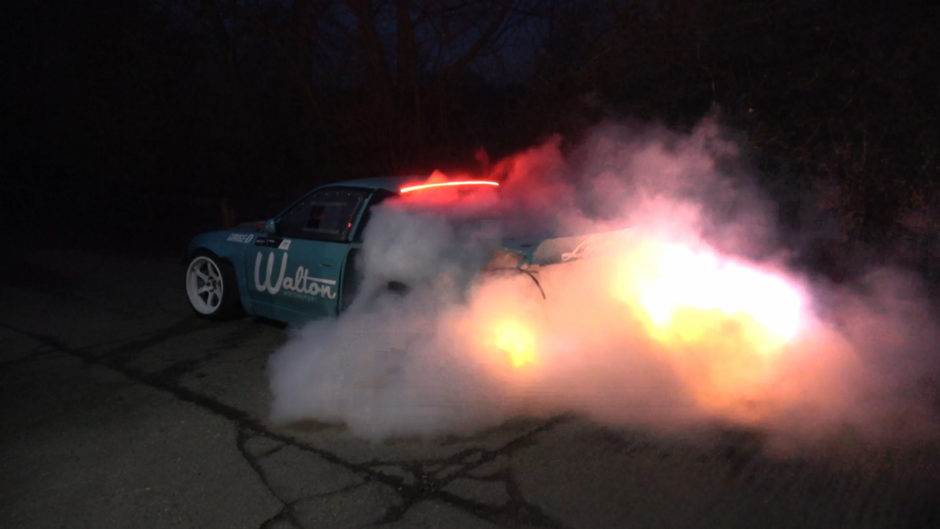 The downside to these systems is cost. Enter the Turbosmart ALV40 and with this, the cost of fresh air anti-lag has come down a considerable amount. It is important to know that the valve alone is not enough, you also need an exhaust manifold to utilize the valve, Know anyone who can help here?

How do I set this up

The first part of the system required is a suitable exhaust manifold. It is of absolutely paramount importance that the manifold has built to stand up to the punishment of fresh air ALS. The largest problem is fragments of the manifold breaking off. Consequently, ending up inside the turbo (and engine at worst). In most applications, the fresh air pipework will enter near the head flange as shown below 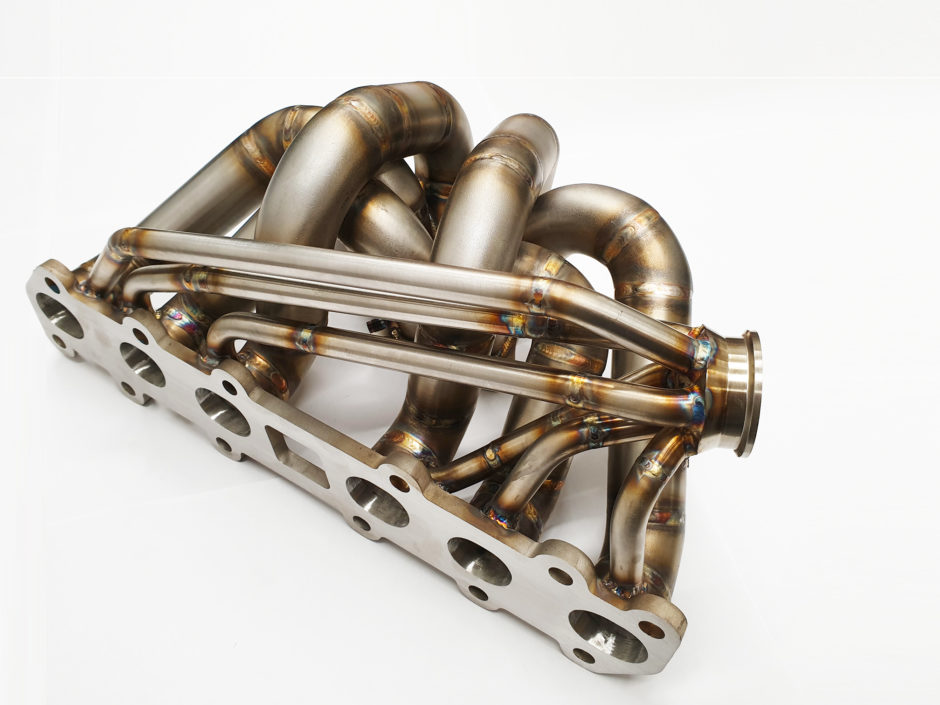 These pipes then join in a collector. Like our in-house designed 6 into 1 collector. the collector will generally fit directly to the Fresh Air Valve. The Turbosmart ALV40 uses a V-Band fitment for this. The V-band fitment is our preference as you can rotate the valve to your requirement.

Below is a diagram courtesy of Turbosmart showing the theory behind the fitment. The next stage as shown in the diagram is to create a fresh air feed to the valve, this feed comes from the boost pipe and must be capable of withstanding boost pressure. We always recommend using as few silicon joiners as possible. 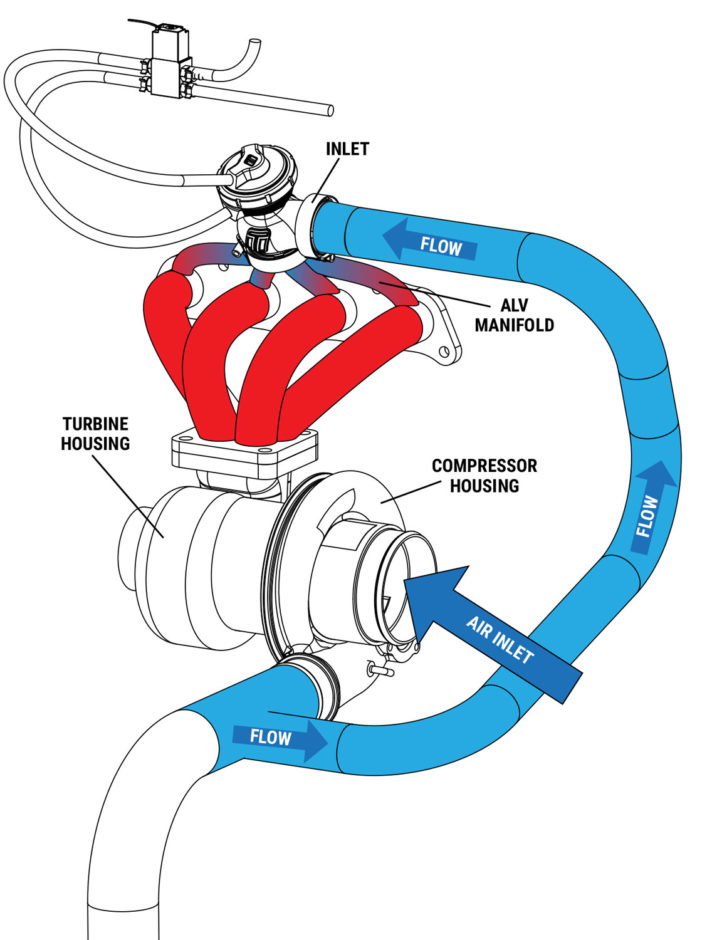 To control the ALV40, It is possible to use a 4 port Mac Solenoid Valve such as the Turbosmart supplied unit. This is supplied by an accumulator tank. The more common method is to use a pressure source rather than a vacuum. Many WRX Cars use a 12v compressor to fill the accumulator tank and keep it topped up. The method we used involves a feed from the boost pipe through a non-return valve. The idea is that you can build some boost, which becomes stored in the accumulator tank. this supply of pressure is then used to activate the valve prior to the fresh air supply trying to close the valve again.

This website uses cookies to improve your experience while you navigate through the website. Out of these cookies, the cookies that are categorized as necessary are stored on your browser as they are essential for the working of basic functionalities of the website. We also use third-party cookies that help us analyze and understand how you use this website. These cookies will be stored in your browser only with your consent. You also have the option to opt-out of these cookies. But opting out of some of these cookies may have an effect on your browsing experience.
Necessary Always Enabled
Necessary cookies are absolutely essential for the website to function properly. This category only includes cookies that ensures basic functionalities and security features of the website. These cookies do not store any personal information.
Non-necessary
Any cookies that may not be particularly necessary for the website to function and is used specifically to collect user personal data via analytics, ads, other embedded contents are termed as non-necessary cookies. It is mandatory to procure user consent prior to running these cookies on your website.
SAVE & ACCEPT